The early nineties were this place of exceptional and experimental games. There was this new type of immersion taking place where the games industry were trying to make games feel […]

The early nineties were this place of exceptional and experimental games. There was this new type of immersion taking place where the games industry were trying to make games feel 3D and from your point of view. This was the future of gaming for kids like me and our minds were blown. Before Wolfenstein 3D (1992), we were playing the terrible Prince of Persia (1989) or games I fondly remember like Commander Keen (1990). To get the games running required a basic understanding of programming. But when Wolfenstein 3D booted up for the first time it felt like you were this character. Like you were shooting and being shot at. It was the first time I can recall having some form of gaming adrenaline. The drawbacks of Wolfenstein 3D were not even understood until Doom (1993) came out and gave us a fluid shooter in a complex and realized world.

Doom was the game that became a showcase for how cool gaming could be. It was shared among everyone. At the time businesses were transitioning to computers in the workspace and Doom became popular in this space too. So Doom was getting a lot of attention. With that came a lot of bad press all throughout the news, which only gave it more popularity. It was a weird time when parents were trying to navigate whether or not the game was detrimental to their child’s health. For me, I was allowed to play it. It was always over at a friends place I played it and loved it. I can still remember playing on those big clunky keyboards, back before you played with a mouse. And the smell of the old CRT monitor with its eventual yellow glow. 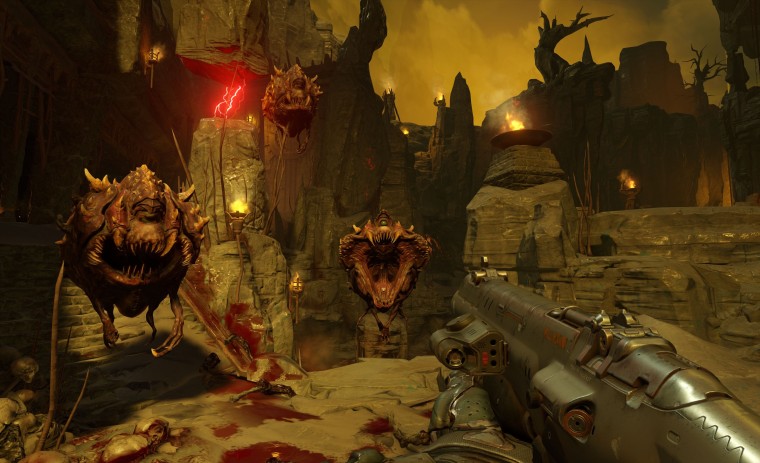 Doom is being talked about again for a few reasons. Firstly, the reboot in 2016 proved to be a massive success and its sequel is releasing later on in the year. Sure the reboot was good, yet I’m still not quite into it like I was the original. Luckily for me, the original Doom, Doom II, and even Doom 3 became available for purchase on PlayStation 4, Nintendo Switch, and Xbox One. After playing Doom (1993) again on the PlayStation 4, I find it still immerses me back into the Hellscape I came to love. The narrative finds you by the amazing world-building along with the classic enemy archetypes in this groundbreaking first-person shooter.

The story of how Doom came to be is rather interesting and I highly recommend the book Masters of Doom by David Kushner. Not only is it an interesting look behind video games it’s a fantastic drama between the two men who shaped the video game industry. The book is currently being adapted into a television show, so more on that as it happens.