The Host (2006) is one of my favorite films. On the outside, it’s a monster film, but it’s actually about family. The Host is laugh-out-loud funny at times, and then […]

The Host (2006) is one of my favorite films. On the outside, it’s a monster film, but it’s actually about family. The Host is laugh-out-loud funny at times, and then it will leave you holding your breath as fear replaces the laughter. Now, I haven’t seen Joon-ho Boon’s other films, but Parasite is without a doubt the successor to The Host. The DNA is found throughout the film, except Parasite has no literal monsters. Parasite on the outside looks like a film about family, but it mutates into something monstrous. 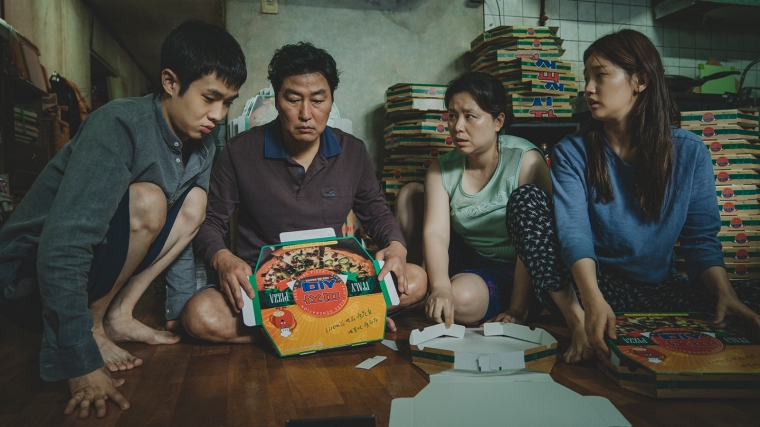 Parasite is about a family of four that are out of work, and now out of luck. They live in a district that is reserved for the lower class. When it rains the water floods down into this place like a basin from above in the flourishing upper class. They are so poor they huddle together in the bathroom to get wi-fi reception from the nearby cafe. After being given a gift that is said to bring luck into the household the family begins to earn money through their son, Ki-woo. Ki-woo fills in as a math tutor for a wealthy household’s daughter. He has no qualifications so he forges some documents together to pass the interview. After tutoring the daughter for a few sessions, and gains the confidence of the family he finds that the son of the family is thought to be an art prodigy by the mum. Ki-woo sees the child’s art is nothing more than childish scribbles and recommends his sister to replace the tutor they had for their son with his sister, Ki-jung. Ki-woo doesn’t say Ki-jung is his sister, and instead reveals her to be someone he’s heard of being great in that field. Then as Ki-jung gains the mother’s confidence she brings her father, Ki-taek into the household to replace the driver, and then Ki-taek brings his wife in to replace the housekeeper. The way each member of the family bring the next in is ingenious, but what started off as small lies has now become a web of deceit. The film only just gets started at this point as the twists and turns become more outrageous, more shocking, and more deadly than the last.

The first half of the film is more light-hearted and you have a sense of where everything is going. Then a shocking discovery happens in the last hour that changes the mood and all expectations out the window. The ending will shock you and I don’t say that lightly. Any movie can have a shocking ending, yet this one has you so invested into the story it leaves you speechless one thing after another. People could write essays on the symbolism found throughout this film. Anyone can watch it on a basic level and enjoy it. On the other hand, it’s a very high brow film. It’s a film where you will find things you didn’t see before and connect it to other things within it. There is also a lot of social commentary on North Korea. I think it would be interesting if you watched The Host before this and you would see all the parallels that would have you enjoying it even more. My review of The Host HERE

I feel quite confident in calling Parasite my favorite film of the year. But, I should just face it, A Beautiful Day in the Neighborhood may beat it. Even still, Parasite is certain to be the best film of the year.

I want to watch it again already!