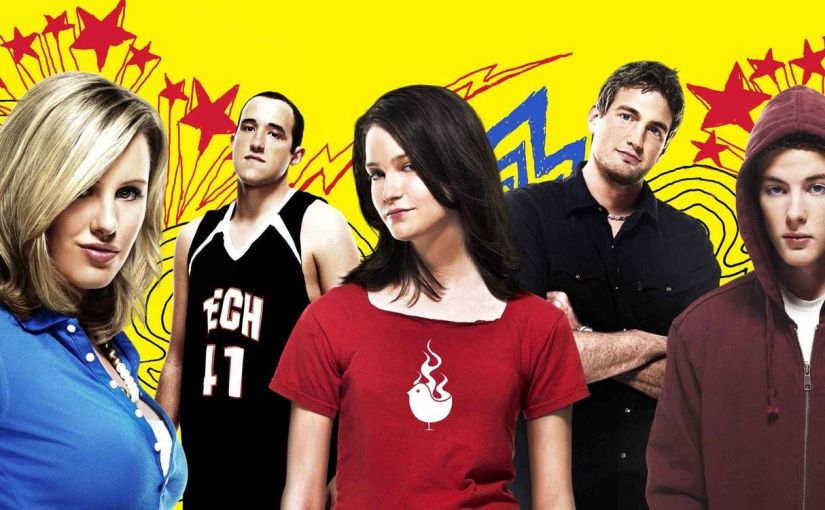 American Teen is a documentary that takes place throughout the lives of four teens in their senior year. Basically, you have the real-life breakfast club. There is the rebel, Hannah. The jock, Colin. The prom queen, Megan, and the geek, Jake. It’s a film that deals with the pressures of the future while nearing the end of school. Are the grades good enough to get into a dream college? Is it possible to get a scholarship? Will life be worse after school?

Megan is the smart girl with the looks. She spends every afternoon working on the student council to give her an edge towards her college ambitions. Her father is always implying for her to work hard to get into the college he wants her to go to, like he and her siblings before her went. It’s a prestigious college, so she needs to be at the top of her game. She is also your typical queen bee who attacks the characters of others. As you later find out she has a reason for being the way she is. Hannah is the quirky outsider. She loves music, film, photography. She wants to leave Warsaw and move to California to become a director. She starts to become absent from school when her boyfriend breaks up with her. You learn that she is on antidepressants and this worries her because she believes she will have manic depression like her mother. Colin is the basketball star of the school. He comes from a family that can’t afford to send him away to college, so he must get a scholarship, or his dad says he will be joining the army. His dad himself was once there and now works as an Elvis impersonator. Colin starts to slip up when he needs to show his best for the games that scouters show up for. Jake is the typical geek in the band. His only real goal is to get a girlfriend. He does succeed in getting a few dates but still lacks the common interests and understanding of the other.

This documentary may be called American Teen, but the troubles are universal to everyone that went through school, no matter what clique you belonged to. Each person is seen to have their own massive pressure weigh down on them toward their ambitions. It is especially interesting to see how the parents handle their kids. From the start they are almost telling them how to succeed through school and by the end they are the people that can help their kids through their troubled times, letting them no whatever happens they will be ok. There are quite a few interesting animated segments that show the personality of each person and how they see the world. As a documentary, a lot does feel contrived. Many questions arise as to say how can these filmmakers possibly let these kids do some of the nasty things they do. One example is a naked picture is spread throughout the school. Apart from that, it is a very emotional journey for these teens to go through.

Being a teen is hard. We have the director to thank for showing us the lives of four very different individuals with very similar fears. There is a lot to relate to here. It is far from a fantastic documentary, but maybe it will give you an understanding of the different people we were back in high school.

I was a serious collector of DVDs from the mid-2000s. I amassed thousands of DVDs. I would buy more than I could watch, and to this day I still own much more than I have seen. The great thing about owning physical copies is the ability to view the title whenever I choose. By doing this I was able to grow my knowledge outside the norm of most. I own and re-watch nearly every television show from the 90s, making it feel as if I spent my teens during that time instead of my 1s and 2s. Then I would have no one to talk about my experiences with these shows because they had no idea what something like Northern Exposure or Twin Peaks is. Streaming has effectively started bringing people that were once like me to the front. I love streaming services for that fact. You get to have all these watercooler moments with people and share in your love for the latest season or movie that hits one of these services.

I rotate between Netflix, Stan, and Amazon. Amazon is the weakest. Stan is perhaps the one I use most, and I think its library of content is similar to Hulu. Netflix is like a made for tv cinema with new attractions debuting every week. Then there are times where I know what I want to watch and spend about twenty minutes looking for it. Alternatively, I search for the title on Just Watch, but usually, I think I remember which streaming service I saw it on, and find myself nearly always wrong. Other times you cannot find it at all. Then I’m forced to search online stores to see if it’s still in print. Even worse is when it’s not available in the country, and you need to order overseas. Look at Say Anything, and it’s one of my favorite movies of all time. You can’t buy it here, and I think you can only stream it on iTunes. I get why some titles are only available on specific streaming services, but why are some just straight out unavailable? Even streaming services only keep content on there for a certain amount of time. And it’s times like that when I’m happy with my collection of physical discs. Overall, it’s not all bad compared to the era of VHS, and at least we all kind of share the same film and television lexicon, while people like me need to help steer others to the stuff, not in the readily accessible content. I like where we are at, for now.