Disney made a smash hit with Snow White that gave them the funding to expand their studios and work output. While the profits of the first feature film went straight back into the business the budget of the next animated feature, Pinocchio was double that of Snow White. Sadly Pinocchio would only make back just over half of its budget. It’s clear by the sheer work that was going into these productions that Walt Disney was getting them as near to perfection as possible regardless of the money required. After Pinnochio was a financial failure at the time, it was but a blip on Disney as they had made one of the biggest films before that, and while Pinocchio was made at a loss, it was still a masterpiece. However, it was imperative for Disney to make money on the next animated feature because there were now higher stakes as the studio had moved to a bigger location and employed much more staff.

Fantasia would have performed better on release if it could get into more theaters. Disney instead required the theaters to upgrade their sound systems to Stereophonic sound for Fantasia to run in them. Basically, it brought sound into modern times, and sound was only rather new in theaters back then. This sounds similar to when James Cameron basically did the same for 3D when Avatar came out and most theaters had a refurbish in at least one cinema to allow for audiences to have a slightly more immersive experience. That’s all Walt wanted, he wanted his films to be seen in the best possible way they could be. For Fantasia, it was to recreate the opera experience in an animated spectacle. Fantasia would also lose money at the time although it did play in select theaters nearly all year round. Between Fantasia and Dumbo, there would be a union strike from inside Disney that could have ended the company completely and would change Walt forever forward. 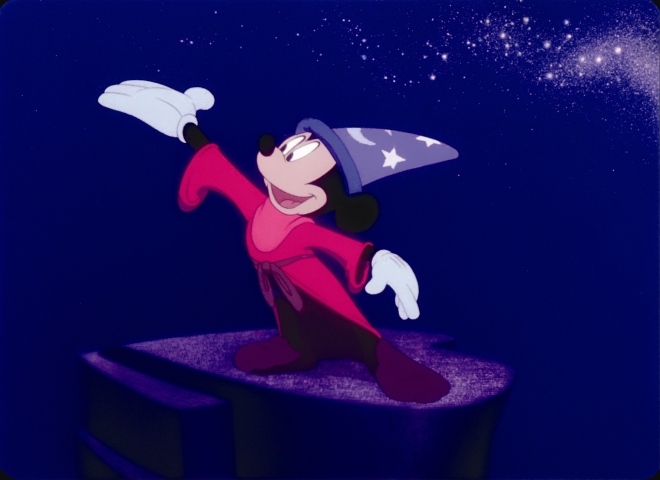 To describe Fantasia, for the most part, is to describe a poem. Without knowing the context we draw our own emotions however close or far from the meaning they may be. Overall, what we get is the feeling of a mood. Fantasia has a fascinating opening. Deems Taylor, our narrator, walks forward and gives us a formal introduction to the different types of imagery we are about to watch. That could be music that follows a narrative, or just imagery that comes to the mind like a fever dream without a sense of direction. From here we are given some beautiful images of the orchestra being silhouetted against interchanging colored backgrounds. The music and imagery seamlessly transition to animation and we are carried along without question. There are eight segments that are self-contained and follow along to a piece of music. The most notable is before the midway mark is The Sorceror’s Apprentice, the one where Mickey wears the big sorcerer’s hat and animates a broom to do his chore. It’s still a splendid segment. It was originally the inspiration for Fantasia in the first place as it was created as a Silly Symphony, but came to cost way too much to be profitable in the short format. Now it’s the centerpiece of Fantasia, and the thing that I would say propelled Mickey into the icon he is today.

Other than The Sorceror’s Apprentice we are treated to amazing visuals that take us to the heavens and to hell, and to the beginning of time itself. A Night on Bald Mountain is rather chilling and would have come across as terrifying on initial release as we watch this massive gargoyle take havoc over a small township. Or seeing dinosaurs brought to life for what must have been the first time on the big screen in the Rite of Spring. The parts of Fantasia that may seem abstract still keep you entertained. With a lengthy two hour duration, you may start to wiggle around in your seat just because it can be draining to move from narrative to narrative every ten minutes or so.

Fantasia is a hard sell, and I might’ve rathered that we just jumped in without any introduction or understanding of what was to come. It would feel more like a piece of German expressionism then. All those films are still just as stylistic and memorable even after a hundred years. Walt Disney was putting a lot on the line so it must be assumed he didn’t want to alienate anyone what is, for the most part, an expensive experimental film. It’s hard to see how Snow White would have been a risk today, but Fantasia definitely still is, and Walt had plans for a sequel he wanted to start working on soon after. Walt may not have gotten his sequel in his lifetime but nearly sixty years later we would get Fantasia 2000.

Fantasia is not for all. It’s a film that might be more moving watching by yourself on a Sunday afternoon. I liked it and respect it a lot. I know I’ll get something different out of it when I watch it five years from now or twenty.

Next time The Reluctant Dragon 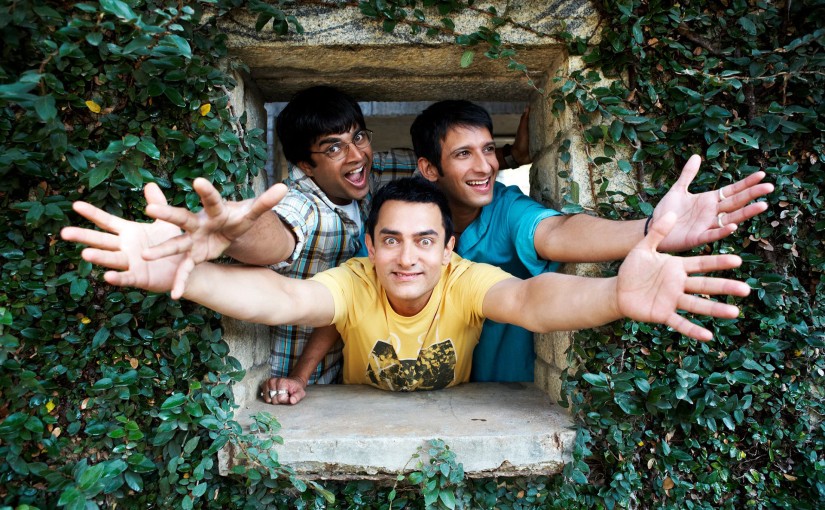 It’s hard to sell a movie to someone. It’s even harder when you tell someone that they should see a movie called 3 Idiots. Not only that, but it’s nearly three hours long and it’s a Bollywood film.

I was looking for something to watch on Netflix and the preview clip for 3 Idiots had me laughing. I put it on planing on only watching a couple of minutes because surely a film with this title can’t be good at three hours long. Three hours later and my girlfriend is in tears. She was sobbing at how beautiful the film is and I too was enamored with it. When it finished I was ready to watch it again because I wanted to spend more time with these characters. Every character is perfectly quirky and iconic in their own right.

The story starts with Farhan (Madhavan) and Raju (Sharman Joshi), two friends learning of the whereabouts of one of their best friends, Rancho (Aamir Khan). They haven’t seen Rancho for five years, he just disappeared. The story then cuts to when the three friends first met at college. Farhan and Raju are met with the humiliation that comes with college hazing, although when Rancho arrives he refuses and instead uses his ingenuity to humiliate the hazers. Rancho is the smartest person in the school so he is always getting himself in trouble by calling the teachers out. The principle tries as hard as he can to catch him out so he can kick him out of the college. Rancho is this amazing friend and mentor to Farhan and Raju, and gets them to be the best versions of themselves they can be. When the two friends search for Rancho in the present they are met with constant dead ends. However, each dead-end teaches them something about Rancho they didn’t know. We also find out why he disappeared without telling his friends. There is so much more that happens throughout, and by the end, everything comes together unexpectedly and beautifully.

3 Idiots may have just opened me up to Bollywood films. It’s full of heartfelt moments, hilarity, romance, catchy songs, and a surprising amount of philosophy too. I’m surprised how much I liked it and thought it was this unknown gem. Was I ever wrong? 3 Idiots was a massive hit. It did well in most East Asian markets. The music video above has 112 Million views so far. This year marks the tenth anniversary of the film, and there is also a sequel in talks.

So maybe I’ve convinced you to give 3 Idiots a watch.