Detective Pikachu gives 90s kids a look beyond the make-believe we all had playing the original Pokémon Blue and Red games. Back when we played those games, we didn’t think about seeing these handheld experiences as movies. No. Those games were worlds we wanted to live in ourselves. Seeing this movie gave me a sense of that. It also showed how wrong my imagination depicted the size of the Pokémon against people.

Detective Pikachu at first seemed like a bit of a wacky movie to begin what will become a franchise of Pokémon films. While watching it, I couldn’t help think it was a combination of Who Framed Roger Rabbit and I Robot. The movie doesn’t hold your hand through the world; you’re just thrown into it like Who Framed Roger Rabbit. So don’t expect to go into this movie expecting to learn about Pokémon, because the questions surround them will remain unanswered. 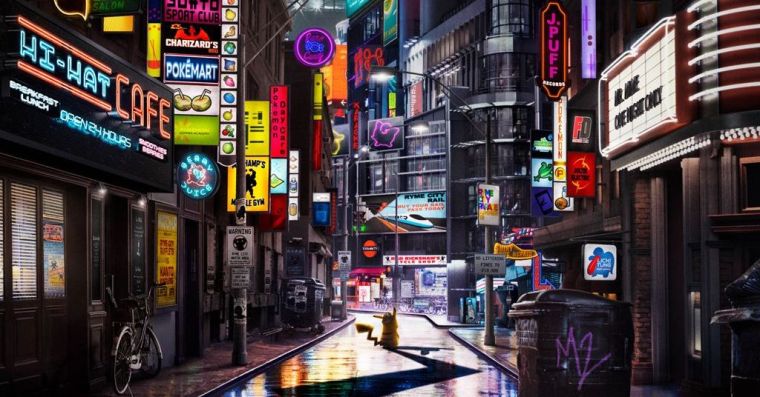 The film starts with Tim (Justice Smith) hearing of his father’s death. His grandmother raised Tim in a small town, so he travels to the big city to pack up his father’s place. Tim’s an isolated sort of guy, he lives in a world where everyone has a Pokémon companion, but he chooses to go without one. That is until he finds the real star of the movie, the mouse type Pokémon, Pikachu. Pokémon cannot be understood by humans, yet Pikachu (voiced by Ryan Reynolds) finds Tim can hear him. Pikachu was his father’s, and while they can communicate, Pikachu has lost his memories of the events that led to the demise of Tim’s father. As Tim and Pikachu conclude foul play, the two investigate what happened.

The nostalgia level is pretty high for Pokémon fans of the games and the television series. I saw my favorite Pokémon, Rayquaza as a pin-up poster in Tim’s room, and this is just one out of plenty of Easter eggs throughout the film. They didn’t overdo the variety of Pokémon on screen either. You probably wouldn’t see more than fifty types, so it makes it manageable for those less familiar from being overwhelmed.

Overall, I had fun watching Detective Pikachu. It’s a good movie, and it’s a solid first entry into the inevitable live-action franchise.